Net Literacy was conceived of by a middle school student who was volunteering at a public library teaching elementary school students and senior citizens computer and Internet skills in 2003. Net Literacy’s first training guides and lesson plans were adapted from materials that were donated by the research librarian. Fourteen years later, Net Literacy continues to say “thank you” by giving back to public libraries since they were involved in its genesis, and supports the impact that public libraries play in increasing access to technology and digital literacy throughout Indiana. The picture below is one of me sitting on some of the computers that the Indiana Library Association recently picked up. In total, Net Literacy has donated 750 computers (and monitors, keyboards, mice, and power cords) to the Indiana Library Association who coordinates their distribution across Indiana.

Since its inception, Net Literacy has donated almost 35,000 computers to K12 families, community centers, libraries, senior centers, schools, and other nonprofits. K12 students that have a computer at home are 7% more likely to graduate from high school. Net Literacy has used a two prong strategy to maximize access to computers – by donating to schools whose student counselors give the computers to underserved and high need families and to nonprofits so that they can construct, expand, or refresh public computer labs. One of Net Literacy’s initiatives has constructed 135 computer labs in schools, churches, and community centers within the Indianapolis area. 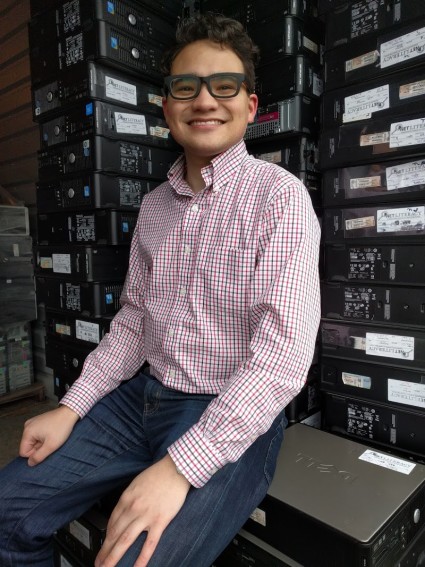