With 35 million fixed and mobile broadband subscribers, Brazil ranks among the top ten countries worldwide by total number of broadband users. Its large population, however, places the country’s broadband penetration outside the top-50 worldwide. This report explores the challenges, opportunities and successes that define Brazil’s Information and Communication Technology experience.

Regionally, Brazil is slightly above the Latin American average in terms of penetration, but behind Chile, Argentina, and Uruguay. Speed of access follows a similar pattern – Brazil is better than the regional average, but below US or European levels. Likewise, Brazil has relatively good international fiber connectivity, although it is not as well connected as some of its neighbors. Similarly, prices for telecommunication and broadband access are lower than other countries in the region yet still relatively high compared to North America and Europe, especially outside the major cities. Phones, computer and telecommunication equipment are also significantly higher in cost, partly due to import duties on IT equipment, further reducing affordability of access among the lower-income groups.

In an effort to help to improve coverage and reduce the cost of broadband access, the government has begun a major broadband infrastructure development initiative which has set ambitious targets to triple broadband uptake by 2014. The largest ICT infrastructure project ever carried out in Brazil, called the National Broadband Plan (PNBL), it aims to ensure that broadband access is available to low-income households, especially in areas that have so far been poorly served. 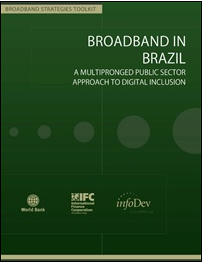