HomeNet Literacy In The News Our view: Teen’s passion lies in making people smile, teaching: Computer wiz empowers others with ‘Net knowledge as 2006’s Citizen of the Year. 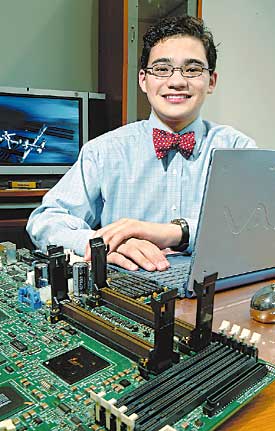 It’s easy to be enthusiastic when talking about Daniel Kent. What’s hard is figuring out how the Carmel 18-year-old can do so much so enthusiastically.

Daniel is dedicated, civic-minded, humble and selfless. He’s the kind of person who’s going to grow up to be someone, and people are going to say proudly, “He came from Hamilton County.”

He received many awards the past few years and is well on his way to a full résumé of achievement. We’re pleased that the most recent one was being named 2006 Topics Newspapers Citizen of the Year, an award our company has presented for 12 years, most recently in a partnership with St. Vincent Carmel Hospital.

Want proof of his dedication?

Daniel’s passion lies in teaching, and his personal calling is, simply, making people smile. By dedicating his free time and sharing his computer and Internet knowledge, he made more than 50,000 people in Hamilton and Marion counties smile during the past three years. They included senior citizens, underserved school children, low-income families and parents.

While many of his peers were using this time in their lives to discover what’s in the world for them, this teenager was finding a way to help elderly people uncover ways to not lose touch with the world. Classes given through his Senior Connects program teach them how to get digital photos of their grandchildren and use e-mail to stay in touch with family and friends.

Want proof of his selflessness?

After Daniel started Senior Connects when he was 15, he wanted to incorporate it as a nonprofit organization, which opens the doors for Net Literacy to get grants and tax-deductible donations. But he needed money to cover the legal fees.

He found it — in his own savings account. Daniel used the $4,000 he had squirreled away to buy a car. Additionally, whenever those awards he’s received came with monetary rewards, the money went straight to the organizations he’s founded because he felt he won the accolades on behalf of the agencies.

Want proof of his humbleness?

“He was out of school for a week, and when he came back, I asked him if he was sick,” said Annie Hilbert, one of his teachers at Brebeuf Jesuit Preparatory. “He said he was tired.” What Daniel didn’t say was that he’d been in Washington, meeting President Bush, as he accepted an award for outstanding volunteerism. He met former President Bill Clinton and former Secretary of State Colin Powell the same way.

Daniel marches to his own beat — he customarily wears a bow tie at school — and people who know him say he’s intelligent, caring and driven.

He’s applied to several colleges and is waiting to hear back from them before he knows where he’ll be in the fall. But wherever it is, he plans to continue the network of programs on campus that he’s started under the umbrella Net Literacy organization.

Like the 11 Topics Newspapers Citizens of the Year that preceded him, Daniel Kent has a passion for what he does and a determination to do it to the best of his ability. Because of his efforts in 2006, Hamilton County is a better place.