The first-year student’s nonprofit, Senior Connects, has become Net Literacy, an organization that provides computers and instruction to underserved communities.

Thanks to the efforts of Daniel Kent ’11 and his friends, thousands of senior citizens are becoming as wired as their tech-savvy grandchildren.

It all started back in 2003, when Kent was a library volunteer in his hometown of Indianapolis, teaching Internet and computer skills to the elderly.

“This was my passion,” he explains. “I’ve been using computers since kindergarten.”

One day, he was chatting with an older gentleman whom he’d earlier instructed in the basics of e-mail. The man mentioned a friend back at his retirement home who had wanted to take the library’s computer classes, but was wheelchair-bound and lacked adequate transportation. “It struck a chord with me,” says Kent, “since I was a student and I felt that no one should be denied the opportunity to learn.”

And so Senior Connects was born. Kent and his friends conducted a community assessment to determine the need for a program that would send students into assisted and independent living facilities and teach computer skills to the residents. “Out of the 10 homes we surveyed, all of them were interested in such a program,” he says. The seniors offered a number of reasons for getting connected: “Everything from wanting to stay in contact with their grandchildren from wanting to play bridge online.” Kent and his group set up a schedule of four-to-five-month classes meeting every Saturday, with each senior assigned a student tutor with a lesson plan tailored to the tutee’s specific needs.

Getting Senior Connects established as a nonprofit, says Kent, was “the greatest initial barrier. There was a lot of legal framework to deal with, stuff that we as students didn’t know a whole lot about.” Fortunately, the teenagers received assistance from parents and local pro bono law firms, who showed them how to file for 501 status. Kent used the money he’d been saving for a car to get Senior Connects on its feet, and the group procured computers from libraries, corporations and government-run organizations.

At first, Kent had hoped that Senior Connects would be an entirely youth-run organization, with the Board of Directors composed of his peers. However, because of liability issues involved with minors being in charge of large sums of money, the board makeup became half youth, half adult, with Senators Evan Bayh (D) and Richard Lugar (R) serving as co-chairs and many community leaders—principals, attorneys, industry executives—getting involved. This situation ended up being beneficial for everyone: “We mentored the adults,” says Kent. “It also provided a good opportunity for us students to form contacts and network.” 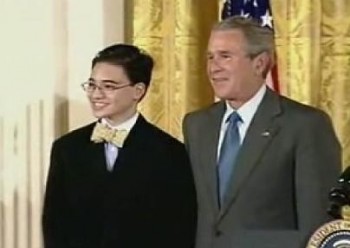 In 2005, Senior Connects became one component of an umbrella organization formed by Kent and his friends called Net Literacy, which brings computers to people in underserved schools, neighborhoods and community centers. “We started reflecting on our role,” says Kent, “and realized it’s not only senior citizens who don’t have access to computers and the Internet.” Net Literacy co-sponsored a grant with a nonprofit called Save the Youth, providing its inner-city Indianapolis center with a new computer lab complete with machines that had been refurbished by students. Net Literacy also works with a grassroots effort to combat urban blight, and recently launched a $100,000 campaign to increase Internet safety for students and families across Indiana.

Kent has received several awards for his work with Senior Connects and Net Literacy, most notably the 2005 President’s Volunteer Service Award, which was presented to him by President Bush in a private ceremony at the White House. “It was pretty exhilarating,” he grins.

Kent served as youth chair of Net Literacy until he left for Haverford last year, and still sits on the organization’s board. He’s definitely interested in bringing Senior Connects to Haverford. “I’ve talked to a lot of individuals who have expressed interest in helping out,” he says, “and people in the administration have been supportive in encouraging me to start the program.”

Meanwhile, hopeful political science major Kent keeps busy at Haverford as a member of multiple student organizations, including Student Political Network (SPN), the Council of Twelve, the Howard Teaf Business Society, the Leadership Development Committee, and the Bi-Co News. His passion for computers hasn’t waned, nor has his desire to share that passion with others. “I look to bring Net Literacy and Senior Connects to Haverford and provide computers to those who do not have adequate, reliable Internet and computer access, educate youth and their parents about Internet safety, and work to partner with other local organizations to bridge the digital divide,” he says.